Want to learn how to whip a mountain bike? Throwing a whip is an extremely stylish and popular way of riding a jump. Whipping isn't only for the looks though, riders also use whipping to set up for the landing.

If a rider has jumped towards the edge of the track because of wind or a bad take off, then most riders will whip their mountain bike to redirect their forward momentum to prevent them landing off the track.

Knowing how to whip a mountain bike in this situation enables the rider to get back towards the middle section of the track, to save their line. This type of whipping is typically used in racing. Let's dig into the how to of of whipping a mountain bike!

Setting Up For The Jump

The first step to whipping a bike is setting up for the jump. When it comes to doing a whip, you need to be familiar with the jump you are going to attempt the whip on.

This is going to help you, as you will know the speed you need to achieve for the jump, and the feel of the jump when it comes to jumping it.

Once you have found a jump that you are familiar with, and you are ready to attempt a whip, you need to carve all the way up to the lip of the jump until you reach the takeoff.

Carving is when you move from one side of the track to the other in the run up to the lip of the jump, in an S shape. (Watch the video at the end of the article on how to carve.)

Carving up the lip will help pre-load momentum for your whip once you leave the jump. If you feel more comfortable whipping to the right, you must tilt all of your body weight to left.

This will make you and your bike start the whipping process before you even get any airtime.

Once you leave the takeoff of the jump to get the perfect whip, you need to immediately turn your bars to the way you want your bike to whip, either left or right.

You also need to turn your bars as if you are going around a corner on flat ground, this will help your bike push out more into the whip. 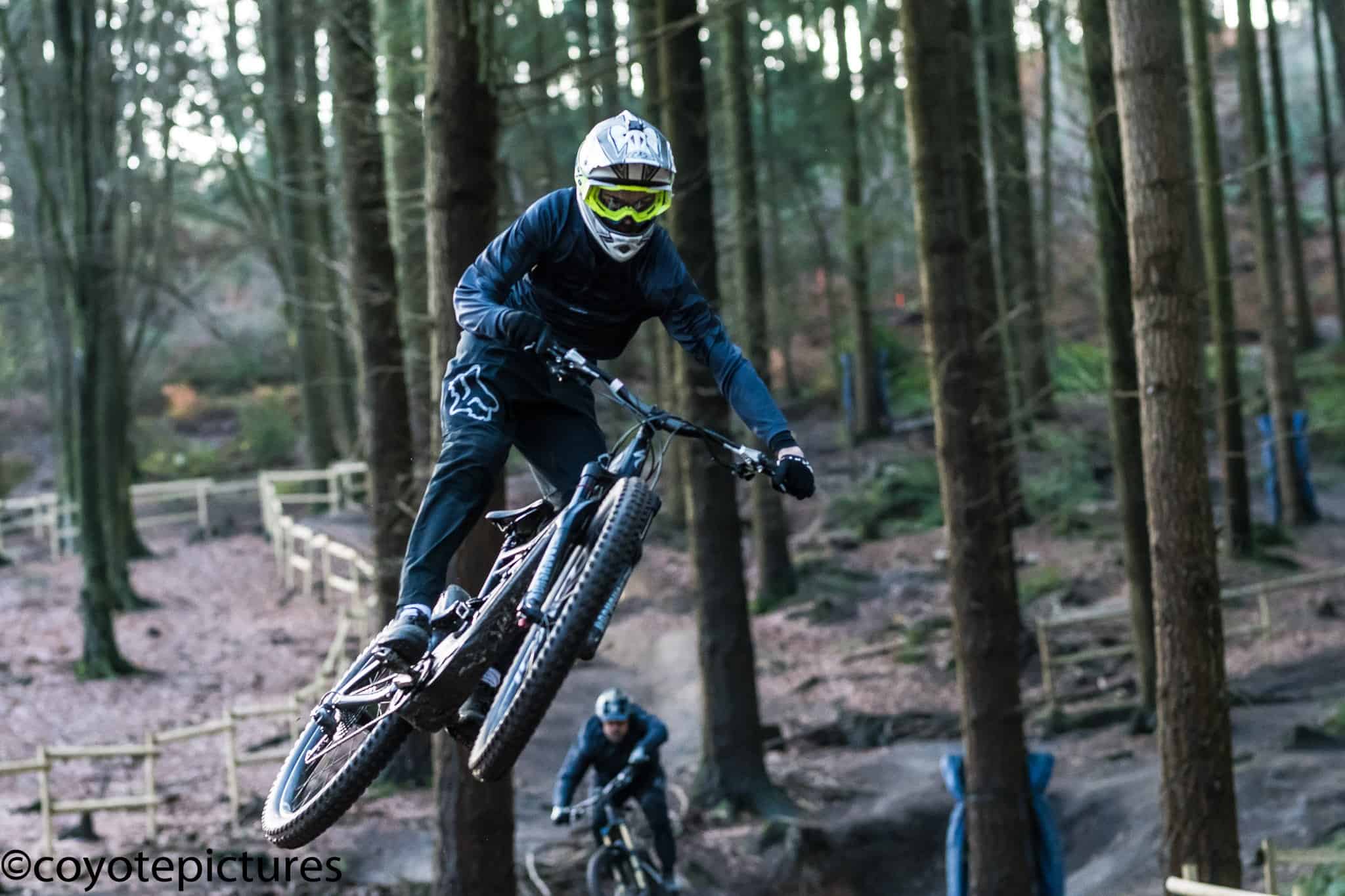 Now that you’ve left the jump and are turning your bars in (either left or right), you are going to want to use your legs to push the bike out more. This will make the bike whip further out and it also balances the bike out more.

This can help in many ways, as it makes the whip look much bigger and more impressive. It also prevents you and the bike from getting blown by wind and becoming unstable in the air.

Bringing The Whip Back

Now that you’ve done everything to get as sideways as possible it's time to bring the whip back.

It is very important to bring a whip back, you can pull off the best whip out there but it won't be a whip if you don’t bring it back.

It is important to do this because when you whip a mountain bike, your body tilts to a different direction from where your bike needs to go, and also to where the trail leads.

Not only this, but your bike will also be very sideways depending on how big a whip you do with your mountain bike.

The last thing you want to do is land sideways, whether you're going very fast doing a big whip on a huge jump, or going slowly, and doing a small whip on a small jump.

So, to master the landing and straighten up from whipping, you will have to make your body free and light. When you have made yourself light on the bike, you must lean your shoulder and upper body towards the landing.

Now turn your bars the opposite way to where they are currently turned to, and make sure your front wheel is facing the landing. Now the front part of your bike and upper body is ready for the landing.

Finally, to land safely, you need to push the back section of the bike with the leg that is in front. This will move the bike back behind you and straighten it up for the landing.

Make sure that you don’t push too hard otherwise the bike will keep on turning and can cause an uncomfortable, and potentially dangerous landing.

Now that your bike is perfectly straight, you are facing the landing and are bracing for impact, you can land safely from whipping and carry on riding the awesome trails.

Keep a good grip on your mountain bike at all times. This will ensure that any wind or sudden adjustment won't move you or your bike when jumping.

It will also make riding safer in general. Learning how to whip a mountain bike is one of the most exhilarating feelings! And don't forget, practice makes perfect.

In the video below Finn Iles shows step by step how to whip a mountain bike:

What is Cross Country Mountain Biking

What is Cross Country Mountain Biking

How To Install A Bike Chain Tensioner on a BMX

How To Install A Bike Chain Tensioner on a BMX