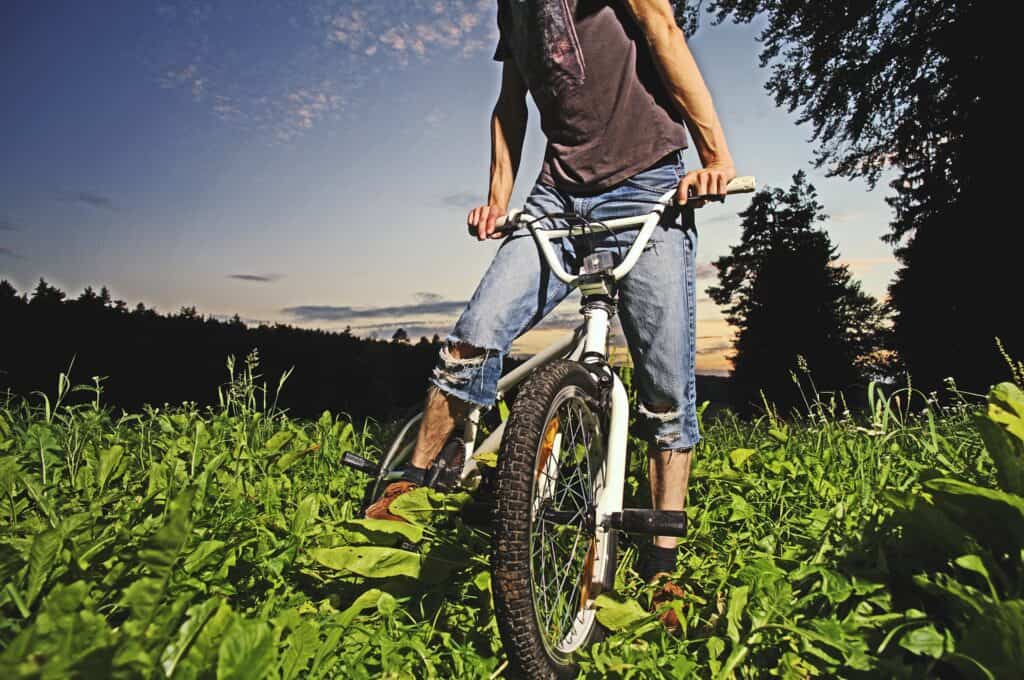 Road cyclists and mountain bike riders, watch your heads because there are BMX riders flying overhead.

All jokes aside, in this article we’re diving deep into BMX bike riding; it’s long history, what it’s all about and what makes it so popular amongst adrenaline junkies. So, strap your pads and helmets up, and let’s launch right into it!

What Does BMX Stand For?

BMX stands for, “Bicycle Motor Cross”, and has a lot to do with how the sport originated and took shape over the generations.

When asking what is BMX, the answer is not super straightforward, however in a nutshell, BMX riding is riding bikes with the aim of performing tricks.

This can be done off-road like on pump tracks, dirt jumps etc, or in urban spaces like streets and skateparks. However, like any sport, there are many disciplines, and the sport has evolved and adapted, just getting more and more incredible since its’ inception.

Also- very important to note, good luck stopping on a BMX bike if you’re going fast, because they don’t have brakes.

A Short History of BMX

Bicycles and the advent of cycling have been around for a very long time. The first bicycle was invented in 1817, and people have been cycling for transport, fun and leisure ever since.

There were even bicycles used in WW2! However, it was not until the 1970’s that BMX became a thing. Bicycle Motor Cross, or BMX for short, was actually conceived by the minds of young cyclists in the area of Southern California.

Before it was officially known as BMX, it was merely young riders modifying their bicycles to make them both light, versatile bicycles that could easily be used both in urban and dirt track environments.

This new style of riding was a cheap, easy and for the most part safer alternative to the popular sport of motocross. The early DIY modified prototypes of these bikes drew inspiration from the lightweight, rugged Schwinn Sting-Ray bicycle model.

Major differences included upgraded springs and stronger tires. These first BMX’s could be ridden really fast across motocross terrain and also on purpose-built BMX tracks, perform tricks, and all in all were the sharp focus of attention of the young adult Californian audience, who found these BMX bikes an awesome alternative to pricey motorcycles used for motocross.

In turn, what started as kids their backyard projects, turned into the sport of BMX. Much developed in the sport from that point on. The

turning point for BMX, came with the release of the 1972 motocross racing documentary ‘On Any Sunday.’

This not only inspired many young riders to build their own BMX bike, but also kicked bicycle manufacturers into gear, and they quickly realized they could greatly benefit from all the popularity and hype that was exploding in the BMX scene after the release of the documentary.

In 1981, the International BMX Federation was formed by multiple countries interested in the sport. The following year in 1982, the IBF held the first BMX World Championships, which was then followed by the JAG World Championships.

Today, there are competitions such as the X-Games, UCI World Champs etc. There are many content creators that freestyle trick, jump and ride BMX bikes too. It had become a very popular and well-respected sport in the mere 50 years it has been around.

How Much is a BMX?

As was mentioned, BMX bikes are different to most bikes, and specialized based on what they are used for. Because there are very many disciplines and uses for BMX bikes.

From street, to Freestyle and Park, to jump trails, flatland, vert ramps and even BMX races, there are far too many variations for use – not to mention brands etc to name a price that would fit for all.

Frame: Cheaper freestyle BMX bikes use steel frames, whilst the best freestyle frames are made from 4130 chromoly tubing. Chromoly is only slightly lighter than aluminium, but it’s also stronger which means the tubing can be thinner, cutting weight. This obviously affects pricing.

Fork: High-end race bikes may often use expensive carbon ﬁbre for forks, however, most will opt for good, plain old-fashioned steel. 4130 chromoly is used for its strength, although high tensile material is more predominant lower down the price range.

Handlebars: Bars and stems are usually tailored to each individual rider, and can be made from many different materials, again this can have an effect on the price.

Brakes: By law, BMX’s are sold with 2 brakes, however the front brakes are in most cases removed to save weight. Whether the bike has hand-lever brakes or a more complex gyro system to prevent wires tangling etc will affect the price.

Wheel/Tyres: Again, this will come down to the purpose. More heavy duty spoke setups will be used in big jumps where rigidity is needed.

As for the tyre compound, more traction will be needed off-road and, on the dirt, and tyres with less traction are suited to urban freestyle riding. The rim and tyre combo will affect pricing.

Drivetrain: BMX bikes use either one-, two- or three-piece cranks. Bottom brackets are often can be the ﬁrst part to go on a BMX bike. And this is due to the impact forces that are channelled through them.

There are a few styles of drivetrains available, depending on the style of crank, but they’re relatively inexpensive to replace. These are all factors affecting pricing.

All in all, there are many different factors affecting BMX prices. The average for a beginner BMX bike will cost in the region of $500.

However, for a pro rider, a BMX bike can cost upwards of $2000+. Not quite as expensive as some of the high-end MTB bikes that can cost well over a cars value, but can still be pricey.

BMXing, just like any other relative extreme sport is quite dangerous and takes patience and time to progress in, so we recommend you start on a budget and see if you enjoy it and meet the adrenaline junkie criteria, and spending more if you do.

How To Manual BMX

Ahh the manual; feat of core strength, balance, timing, wind speed, gravitational force… this is a bit of an exaggeration, but it is a tricky trick. If you are unfamiliar with the term – a manual essentially means riding on one of your two wheels.

The preliminary steps in the manual act as practice steps in learning the bunny hop. First, you should have the balls of your feet over the

pedals getting ready to balance, and your hand over the rear brake lever to stop if the wheel spins you out of balance.

Next, load the back spring, and in one swift motion you must shift your weight from a hunched forward position to a solid leaned back position. This quick, controlled motion should lift the front wheel off the ground.

Keep in mind, that you will likely spin out and fall a few times learning it, so try it on some soft grass, and make sure you’re going fast enough and have your bottom and feet in the right place, as well as a good grip on the handles when finding the balance point when going for it.

This trick can be exceptionally frustrating when attempting to learn. However, once you have it mastered, as they say it’s like riding a bike, and it will get more consistent with practice, to the point where you can take it to the track and learn to pump with it.

How To Wheelie BMX

If you’re struggling with the full-on manual, you can try a wheelie first to get the feel of being one wheel on the ground.

The wheelie is easier cause you can propel yourself while the manual relies on inertia, and is one of the oldest BMX tricks there is.

Unlike a manual, the speed of your pedal strokes is what keeps you balanced, not the control and balance of the lean, push and hold manual method.

To initiate a wheelie, you need quite a bit of speed – if your bike is feeling difficult to control, you’re going too slowly. Before lifting your wheel, put your non-dominant foot in position at the lowest point of pedalling, and put your dominant foot at the top ready to be pushed down with force.

Also, make sure that your knees are in-line with the pedals—if your knees are turned out too much, you will throw off your balance. Practice by pulling the wheel a few inches off the floor and pedalling, to get a sense of the weight of your bike and speed you need to be going.

Once you’re ready to try it, again find a grassy spot and get some speed. Keeping your arms straight, vertical, and parallel to each other; you’re your feet positioned as said above, shift your weight backwards and thrust the handlebars back. As you pull back, push down hard with your dominant foot.

Make sure you keep a greater pulling force than a pushing force, but also keep enough of a forward push so that you don’t fall backwards. Pedal continuously and apply torque to keep the front wheel skyward.

Continue pedalling and be sure to thrust and create enough torque to maintain your position, while keeping your bottom at the back of the seat to keep balance. To slow down and get out of a wheelie, simply slow and stop pedalling.

This may seem harder than a manual and to an untrained eye may look the same, however as was mentioned, this trick relies on momentum from the pedalling, which is much easier to control than the inertia and sheer balance you need for a manual.

How To Bunny Hop BMX

Once you have the manual mastered, and are one-wheeling with confidence and finesse like Danny Macaskill, the next major trick to get under your belt is the bunny hop.

This will help you jump over obstacles and clear little gaps with ease, and is a fundamental trick comparable to the ollie in skateboarding, that will give you a taste of being airborne and help you learn more advanced tricks to use.

To initiate this trick, you’ll preferably want to be standing in a bit of a crouch. Just like you learnt in the wheelie and manual, you initiate this trick by loading the back spring and putting pressure on the back wheel to gain leverage on the handlebars.

At this point, pull the handlebars up toward your chest, so that the front wheel is at the highest point without the pedals moving. Then, in a rapid motion extend your arms forwards and up, essentially pulling the handlebar put from under you.

Use this motion as leverage to help you jump with your legs on the pedals, and pull your knees and legs up to the frame. Once you feel the bike levelling out, catch it cleanly and ride away on 2 wheels. Don’t move your feet in the pedals during the motion as this can cause you to lose balance.

The feeling of your first lift-off is definitely one to remember, but don’t feel despondent if it’s not super high. Many riders need to practice and practice even just to be able to bunny hop up onto a curb.

This trick can be learnt on any even surface, and you can even do it standing still if you’re quick enough with the load, pull and jump motion.

The world of BMX is exciting, adrenaline-fuelled and fun. What’s great is that unlike MTB, it can be done almost anywhere- from dirt pump tracks to urban skate parks and the streets. It really has something for everyone and is a great way to progress and test your riding skills.

The Cyclist Review is an Amazon Associate and earns from qualifying purchases by advertising and linking to Amazon.